The Problem with Men’s and Women’s Bibles Aimee Byrd opens her book Recovering from Biblical Manhood and Womanhood  with a question: “How many Bibles are in your house?” The Bible shelf at a big-box bookstore presents a kaleidoscope of options for every imaginable demographic group. There are Bibles for kids and grandparents. There are comic book Bibles, Bibles for travelers, for artists, for the bereaved, for the busy, for scholars, and for dummies.

Perhaps it should be no surprise that the most individualistic culture the world has ever known managed to create an incalculable menagerie of me-focused Bibles. However, if the Bible is the record of the “faith that was once for all delivered to the saints,” (Jude 1:3) have we erred in creating so many specialized versions of it?

The question is especially apt when it comes to perhaps the most marketable division on the Bible shelf: Bibles for men and women.

Byrd asks, “Do separate Bibles for men and women shape the way we read Scripture?”

Yes. Quite a bit.

The Medium Is The Message

Before we take a closer look at men’s and women’s Bibles, we need to meet the godfather of media theory, Marshall McLuhan.

McLuhan goes on to say:

“Our conventional response to all media, namely that it is how they are used that counts, is the numb stance of the technological idiot. For the ‘content’ of a medium is like the juicy piece of meat carried by the burglar to distract the watchdog of the mind.”

He is saying that if you think the medium of communication (say, a Bible for women full of notes about what the Bible means for women) is neutral, you may have only become numb. You might only be distracted by the inviting cover design, the slick marketing copy, and the promises of spiritual wisdom tailored just for you.

If McLuhan is right, it isn’t only the text of Bibles for men and women that affects the meanings we take from it, but the physical context of the text. The medium (the design of the Bible) becomes the lens through which the message (the words of Scripture) are viewed.

When we buy a specialized Bible, we suddenly also have to contend with the idea that men and women have different needs before God, take different paths to sanctification, move in different spheres of life, and are different sorts of beings.

But is all that true?

Let’s look at some of those differences between men’s and women’s Bibles in order to see if we can sort out some of the messages from the medium.

Judge a Bible by Its Cover

The most obvious difference between Bibles for men and women can be spotted at twenty paces: the cover design.

Bibles for women are designed with colors and patterns that marketers think will appeal to women. Pastels feature largely. Botanicals and curlicues abound. The patterns on the covers have fancy names like “Summer Garden” and “Sea Breeze.” In contrast, Bibles marketed to men tend to steer clear of any of those hallmarks of feminine design, rightly assuming that most men don’t want to be caught dead carrying around a “womanly” Bible.

On the topic of the covers of women’s Bibles, Byrd has much to say:

“Don’t get me wrong; I like pretty things. But I find the froufrou covers for women insulting—especially for God’s word. The Bible isn’t an accessory that decorates my Instagram feed or bookshelf. While the amazing grace of God is a beautiful thing, there’s also a lot of downright ugly in Scripture, isn’t there? Sin is horrifying. And Scripture gives us the uncut version. Is the pretty cover supposed to soften this? … I find it all very condescending. I want to read my Bible just as seriously as men. The pretty cover already begins to send a message that women will approach Scripture less seriously than men.” 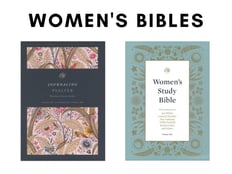 Byrd draws a connection between the “froufrou cover” and an implied lack of seriousness when women study the Bible. Fair enough. When I think of “serious scholarship,” images of pastel flowers and Boho arabesques don’t come to mind. Rather, “serious scholarship” evokes leather, libraries, footnotes, serif fonts, and gilt-edged pages.

The implied message is not difficult to decipher: lady-Bibles are good for “devotionals,” but let’s leave the serious stuff for the men.

The Canary in the Contents

The differences between Bibles marketed to men and women don’t stop at the covers, however. The supplemental content packed into the Bibles also tells the story not only of men’s and women’s differing needs, but how Christian men and women are viewed differently as human beings.

Let’s look at the ESV study Bibles for men and women. Here is a selection of titles of the supplementary articles appearing at the end of the men’s and women’s versions of the Bible.

The supplemental material in the men’s Bible includes:

Byrd comments on the differences between these two lists:

“The titles of these articles reflect the cultural stereotypes and gender tropes of ‘manhood’ and ‘womanhood.’ The specific articles targeted to women predominantly address weakness and victimhood while the men’s are about leadership and agency. The ones that address a man’s weakness are focused on ways they victimize women… Do women have nothing to learn about leadership, self-control, calling, and life in the local church? Do men not need to learn about forgiveness, emotional health, and missional living? Why isn’t pornography labeled as a ‘self-destructive behavior’ in the article’s title as in the title addressing women’s weakness, and are men the only gender prone to lust, or women to eating disorders? Why is it positive to use an expression such as “a man’s work,” while the authors would be cautious to title an article, ‘A Woman’s Work.’”

After all, it is both sexes together that are made in the image of God, not each alone, nor one before the other. When it comes to Christian discipleship, men and women have far more in common than that which divides them.

But you wouldn’t know that to look at specialized devotional Bibles.

This isn’t to say that it is wrong to connect women with resources about eating disorders or to connect men with resources about pornography. It is only to point out that these selections are being made in the light of a larger, unquestioned consensus about what it means for a man and woman to be restored in the image of God. And that matters a lot because it shapes your theology of gender and your conception of the human experience.

When we build things, we build ideas into them. Those ideas reflect our examined or unexamined assumptions about the world and they, in turn, go out into the world and reshape it in line with our assumptions. So if we are going to make things (especially when the things we make are functioning as a wrapper and filter for Holy Scripture), we had better be careful about exactly what assumptions we are building into them.

Andy Patton is a former staff member at L'Abri Fellowship in England and holds an M. A. in theology from Trinity Evangelical Divinity School. Read more from Andy on The Darking Psalter (translations of the Psalms with new poetry), Three Things (a monthly digest of resources to help people connect with culture, neighbor, and God), and Still Point (reflections on deconstruction and why people leave Christianity).

What are NFTs and Should Christians Care?