SURVEY: The Rapid Secularization of America is Underway 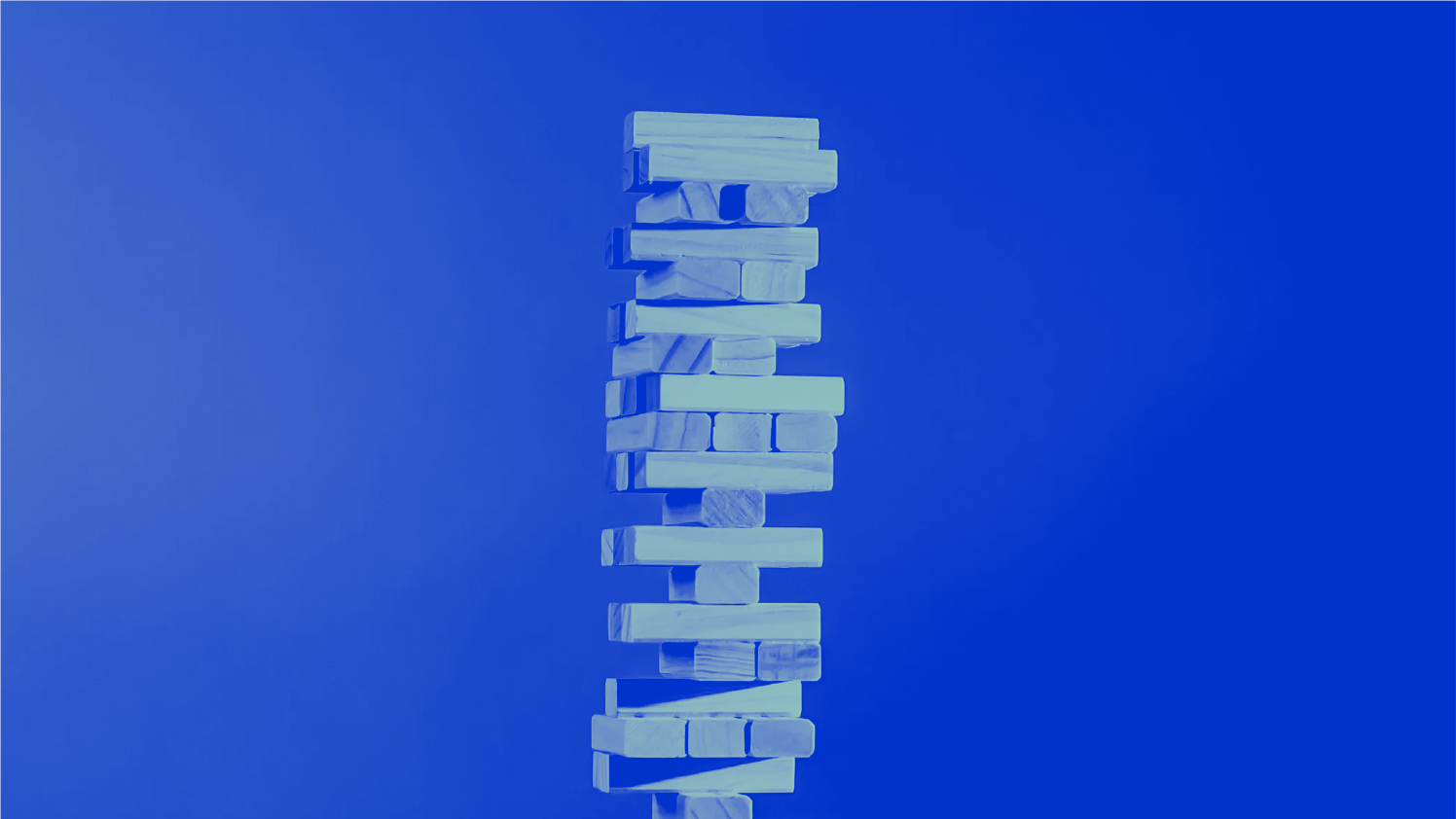 The following is a post from our recent podcast guest, Ryan Burge. Ryan is an assistant professor of political science at Eastern Illinois University, the author of numerous journal articles, and the co-founder of and a frequent contributor to Religion in Public, a forum for scholars of religion and politics to make their work accessible to a more general audience. He is also a pastor in the American Baptist Church.

It’s been nearly two years since I’ve written a post about the precarious religious position of Generation Z (those born after 1995), and with data from late 2021 now available, it seems like a prime opportunity to update what we know about Generation Z and their religious inclinations.

Because almost all surveys only contact adult Americans (18+), we can’t get a full picture of the entirety of Gen Z; we can only gain insight into the oldest members of this generation. Thus, here I am analyzing those between the ages of 18 and 25 years old.

Let’s start broadly, comparing the religious composition of different generations, beginning with the Silent Generation (who were born between 1925 and 1945). In this generation, half of all respondents indicate that they are Protestant, while 22% say that they are Catholic. Just 8% of the Silent Generation say that they are atheists or agnostics, and nearly the same share describe their religion as “nothing in particular” (10%). In sum, 72% of the oldest Americans are Christian, and 18% have no religion—we’ll call this group “nones.”

Now, for Generation Z, things are much different. Just 22% of the youngest adults describe themselves as Protestant—a more than 50% decline from the Silents. Catholics make up 14% of Gen Z, an eight-percentage-point dip from the Silent Generation. However, the share of nones is much larger.

Seventeen percent of young people describe their religion as atheist or agnostic, and 31% say that they are attached to no religion in particular. Taken together, 36% of Gen Z are Christians, while 48% are nones. They are the first generation in history in which the nones clearly outnumber the Christians. 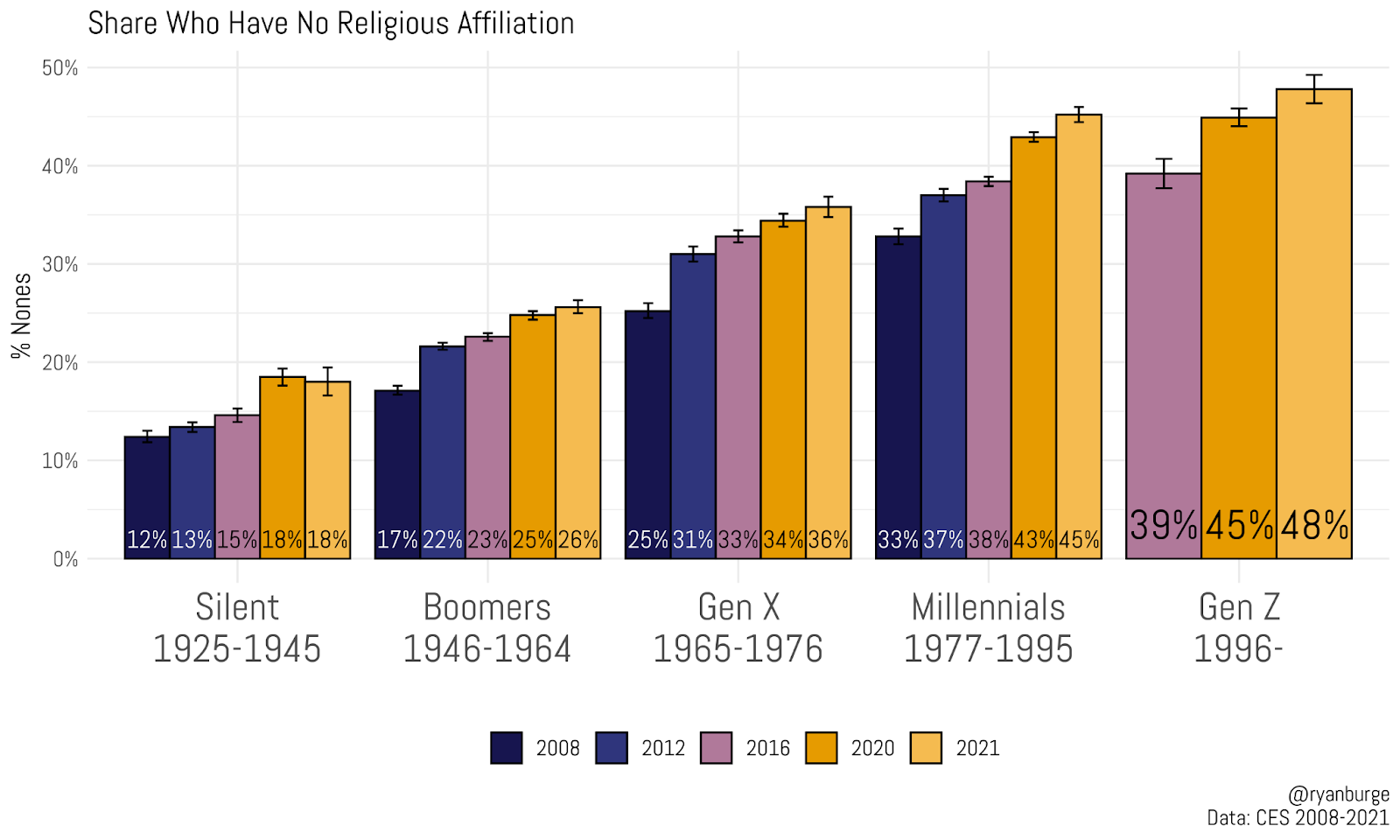 But is the rise of the nones accelerating equally among all generational cohorts, or is it just happening among the youngest Americans? The answer is a bit nuanced. The graph above visualizes the share who were nones in 2008, 2012, 2016, 2020, and 2021 for each of the five generations mentioned previously.

It’s worth pointing out that there’s a larger share of Gen X nones in 2021 than there were Millennial nones in 2008. But for each of these three previously mentioned generations, there’s been a steady increase, although that increase seems to have slowed significantly between 2016 and 2021.

For Millennials, that’s not the case. One-third of them were nones in 2008. That jumped four percentage points by 2012, but only inched up a single point to 38% between 2012 and 2016. However, from that point forward, Millennials have left behind religious affiliation in droves—seeing a seven-point increase in just five years.

That same general trend is evident among members of Generation Z. The earliest they showed up in polls was in 2016, when 39% were nones. That rose six percentage points by 2020, then crept up another three points just between 2020 and 2021. Now, nearly half of Gen Z says that they have no religious affiliation.

However, there’s also a finding in the data that seems to run counter to the trend previously described. When looking at each generation through the lens of religious service attendance, it would be reasonable to assume that younger generations are less likely to attend services than older Americans. But that’s not exactly the case.

When it comes to which generation is the most absent from worship, it’s not Generation Z; it’s the Millennials and Gen X. Sixty percent of Millennials say that they attend services seldom or never, which is statistically the same as Generation X.

Compared to those two generations, Gen Z is slightly more likely to attend worship. Thirty-six percent said that they never attended, and another 18% indicated that their attendance was seldom. That’s only 54%, about six percentage points lower than the two prior generations. At the same time, 23% of Gen Z are weekly attenders, which is higher than Gen X or Millennials (21%).

Hear Ryan discuss more on the growth of the "nones" on our recent episode. It’s not easy to figure out why there’s this noticeable uptick in attendance among Generation Z. Dan Cox at the American Enterprise Institute reports that their data shows 47% of Gen Z never attend services—eleven points higher than the CES’s numbers. And when I checked the same figures with the General Social Survey, 41% never attended. So, there may be just a statistical aberration in this data.

Regardless, we have a picture of a rapidly secularizing America that will significantly alter the culture and politics of the United States for generations to come. A majority of Baby Boomers are now in their retirement years, and even the youngest ones will exit the workforce in the next few years. That leaves Gen X (35% nones; 60% never/seldom attend) and Millennials (45% nones; 60% never/seldom attend) to take over the institutions that give structure and order to American life. We have only begun to consider just how seismic this shift will be.

8 Books for Christians on Political Tribalism